- June 11, 2021
The integration of a Rights-Based Approach (RBA) is critical for a transformative, comprehensive and measurable post-2020 global biodiversity framework (GBF) and the realization of a world where all people can live in harmony with nature,  in line with Member States’ obligations under international law.   The aim is to improve positions rather than just conditions for sustainable change and fairness. Fundamental rights include substantive and procedural rights. Every right has a corresponding duty. David R. Boyd, the Special Rapporteur on the issue of human rights obligations relating to the enjoyment of a safe, clean, healthy and sustainable environment, states that respect of human rights and a rights-based approach are key to “ achieving rapid and ambitious progress in the protection, conservation and sustainable use of biodiversity . [1] ”   Human rights and a healthy environment are mutually dependent. Everyone’s ability to enjoy human rights to life, health, food and water depend
Post a Comment
Read more

- May 24, 2021
A decade ago, in 2010 the CBD decided to “eliminate, phase our or reform incentives that are harmful to biodiversity.” Now It’s 2021 – Aichi Target 3 has not been achieved – but instead of stepping up the efforts, the goal of “eliminating” is getting eliminated itself. A short time line: 2010:  COP 10 in Nagoya decided on  Aichi Target 3 “By 2020, at the latest, incentives, including subsidies, harmful to biodiversity are eliminated, phased out or reformed in order to minimize or avoid negative impacts, and positive incentives for the conservation and sustainable use of biodiversity are developed and applied, consistent and in harmony with the Convention and other relevant international obligations, taking into account national socio economic conditions. ”      and in  Decision X/44, paras 3 and 9  the COP urged Parties to  “… increase their efforts in actively identifying, eliminating, phasing out, or reforming, […]  existing harmful incentives...” 2014:  COP 12 in  Pyeongchang set  i
Post a Comment
Read more

Is the CBD trying to mirror the approach to baselines and goals in the UNFCCC?

- May 23, 2021
Clarifying baselines and goals in the UNFCCC While the UNFCCC GHG baseline is robust and clear, its temperature goals and targets are not. The UNFCCC climate baseline is the pre-industrial level of GHG in the atmosphere - chosen because it supports the temperature regime under which life on Earth as we know it has thrived. The goal of limiting global warming to as close as possible to 1.5 degrees above the pre industrial level was chosen in an attempt to minimize harm to life on Earth.  However, concerns are growing that this goal is inadequate. The current increase in global average temperature (1.1 degrees) is exacerbating loss and damage from drought, fire, pests and disease. And evidence is mounting that the impact of these increasing threats is greater in damaged and fragmented ecosystems. The UNFCCC concept of net zero assumes 1 tonne of carbon emitted from any source has the same value as 1 tonne of carbon sequestered in any way.  It ignores profound differences betwe
Post a Comment
Read more

- May 18, 2021
On 14 th   May, Friends of the Earth International and EcoNexus held a webinar on mainstreaming. It looked into the vital importance of mainstreaming to make sure that all economic sectors -in aggregate- reduce their impact so that the world can return to live within planetary boundaries as defined for biodiversity.  It quickly became clear that the process to define the draft mainstreaming decision has been flawed. There was an Informal Advisory Group (IAG), as decided by the COP, with a balanced participation of parties and a limited number of stakeholders. However, an extra Extended Consultative Network (ECN) has been set up, comprised of stakeholders only, most of them with corporate links. The inputs of the ECN have been taken into account for the drafting of the IAG, in a completely un-transparent manner.    More information on the mainstreaming process can be found in the presentation which is available here:  https://nextcloud.foei.org/index.php/s/jyG8zBQSqR72eDk   The result i
Post a Comment
Read more

How do we get ‘beyond the gap’? By placing biodiversity finance in the global economy

- May 15, 2021
As CBD negotiations ramp up, one thing that we can expect for sure is that there will be a lot of talk about ‘the gap’, that is, the discrepancy between current financing of biodiversity conservation, and the projected amount needed to arrest biodiversity loss. Discussions about this gap tend to treat biodiversity conservation as a simple mathematical equation: add money and there will be less biodiversity loss. Of course, the problem with this framing is the extent to which practices that contribute to biodiversity loss are embedded in our current political-economic system; a problem that will not be so easily solved by injecting funding into existing conservation models. In response to this oversight, our research collective, alongside the Third World Network, has produced a report [1]   that proposes a different framing of the issue, which includes concrete recommendations for negotiators and civil society about how to address these underlying drivers.   To move ‘beyond the gap’, we
Post a Comment
Read more

The cart before the horse? 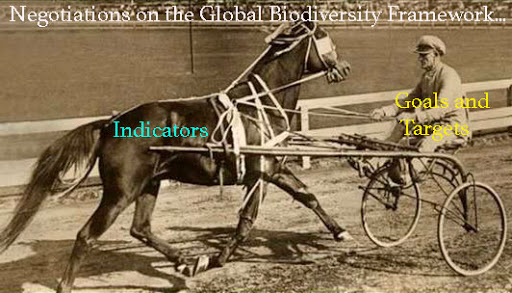 As the negotiations of SBSTTA 24 mover forward, civil society wonders if we are putting the cart before the horse
Post a Comment
Read more

- April 29, 2021
Once upon a time, some 30 years ago, life was very easy for conservationists. Instead of having to cope with complicated concepts like biodiversity, which are defined and quantifiable with scientifically agreed indicators, they could simply conserve “nature”. Almost everything that looked more or less green qualified as “nature”: pine plantations, destroyed wetlands (called “polders” in countries like the Netherlands), potato fields with some flowers in them, shrimp ponds ,or city parks. Moreover, all this nature could easily be protected by simply putting a fence around it. The resulting protected areas, the only areas that could be controlled by, often politically insignificant, nature conservation agencies and organizations, formed the cornerstone of nature conservation policies.   Then, in 1992, the Convention on Biodiversity came along, and everything became more complicated. Suddenly it mattered whether “nature” was biodiverse or not, and whether it was actually an ecosystem that
Post a Comment
Read more
More posts